Last Monday we decided to go visit the Living Planet Aquarium in Sandy.  We have talked about going for a while, but decided we needed to get out of the house, and this seemed like a good fit in January.  Sofia was interested in most of it, but we had to sort of convince her to really look at things and see them. We really enjoyed the river otters, they were fun and active.  And some of my favorites were the jellyfish tanks: 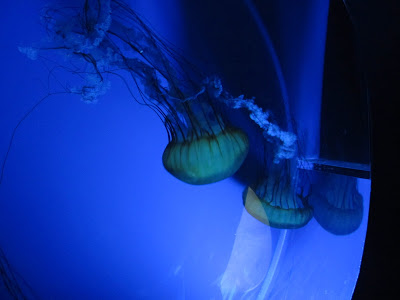 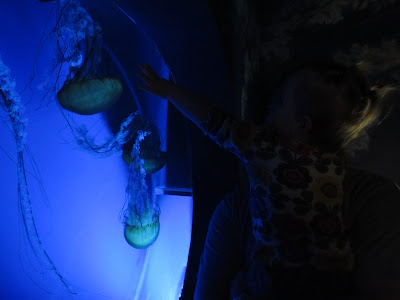 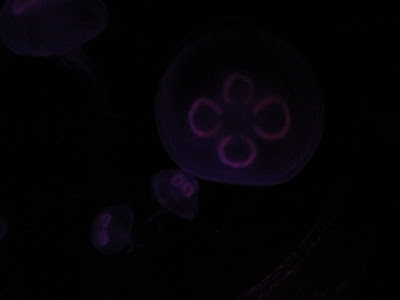 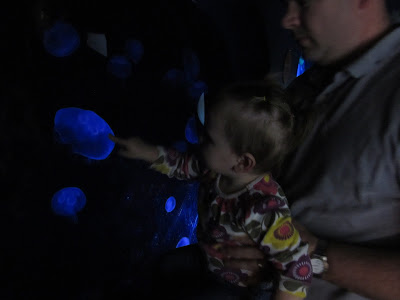 We headed into the saltwater section just as they were getting ready to feed the rays, but it was a little crazy and crowded, so we left to go look at the other tanks.  About 1/2 an hour later, we came back to the 'touch pool' where the rays were, and we were trying to point the fish out to Sofia.  She was just enjoying the water really: 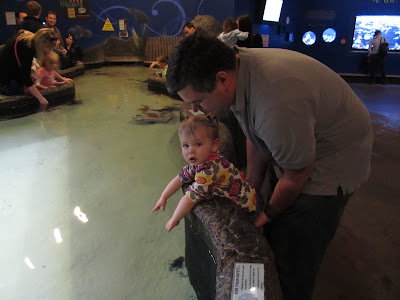 And then it happened.  Shortly after I took this picture, an ugly little fish shot out from under a rock, headed straight for those little fingers dangling in the water, and took a little nibble of them, along with making a little splash.  We were startled, and she was startled, and then she immediately started SCREAMING.  I don't know if that fish had teeth, but we couldn't see any marks on her fingers.  I think it was more of the shock than anything.  We dried her hands off, and checked them out and tried to console her. Once she calmed down a little, we decided we should probably try to turn this back into a positive experience, so she wasn't terrified of water and/or fish for the rest of her life!  We went back over, and she wouldn't put her hands in (not that I blame her!), but as she watched me touch a little shark that kept swimming close, she got curious, and ended up touching it a few times, and was fairly cheery by the time we moved on.
From their pictures of what fish were in the touch tank, we saw what kind of fish it was, it's called a sculpin: 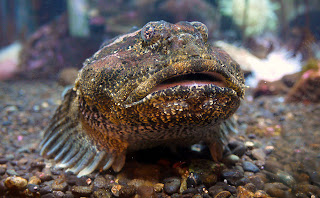 He really was an ugly little thing, and he luckily stayed hidden for the rest of our stay!  I suppose those little fingers might have looked like a tasty treat, but I don't think that logic would have convinced Sofia!

Once we felt like water/fish had become slightly less scary again, we moved on to see the rest of the exhibits. We saw a few more tanks, watched the penguins watch us as they swam by, checked out the Amazon river section, then headed out.

Overall, it turned out to be a fun experience, and Jon and I couldn't help but laugh about the finger tasting, once we knew she was no worse for the wear!