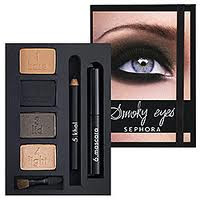 Normally I am not someone that can justify spending a lot of money on something like makeup.  I feel like I'm getting a little out of control when I want the latest-and-greatest more expensive L'Oreal mascara at Wal-Mart, and then if I do get it, I always end up going back to my stand-by anyway. Now I admit, a few years ago I decided to try Bare Minerals makeup, which can be pricey but a little goes a long way and I have stuck by that one, but I don't have to buy it all that often so I can justify that.

Then, not that long ago, I went into the Sephora store at a local mall.  So shiny. So sexy. So colorful.  All these things that you never knew you needed until you saw them in their cleverly packaged displays that convince you you would be FAR more beautiful if you would buy the tiny tube of something or other for just a mere $40. I started to feel like my current makeup routine was drastically lacking.  And they have these helpful employees stationed all around that are ready and willing to tell you how if you just bought this or that, it would make all the difference for you!

Luckily for me, I had come with a specific purpose.  I wanted an eye-shadow primer, something to help my eye makeup to stay where I put it in the morning, instead of smudged wherever my work day led it.  I asked one of the super helpful employees, she took me around and showed me their top 3 out of their many options.  I wondered what helped make these the 'top 3', perhaps the ones that are paying the store the best for advertising, but didn't want to go there.  I waited until she felt awkward standing there staring at me and left, then started testing (yeah, you can test everything in the store, kinda sounds like a germfest to me).  I checked prices and ounces, decided what I would be most able to use sparingly.  I decided on the one that had the most fun packaging (but not the most expensive), but only because it actually was what I had been looking for.  I had my Christmas money that I had saved specifically for my frivolous makeup splurge, and just bought the one item from a young man who was better made up than me on my best day, and then I left feeling like I had escaped.

So a month or so later, I have determined it was worth it.  I actually LOVE my little splurge, and hopefully it lasts long enough that I could possibly justify it again.  And away from their shiny displays and perfectly made-up staff, my makeup routine seems just fine to me.
Posted by Sara at 3:35 PM